Travel to Iran: What we learned as a group of women

In April 2017, Journeys hosted its first women’s-only adventure through Iran. Led by staff member Kerina Rowley, this group of women included 13 seasoned travelers, all of whom were eager to travel to Iran and immerse themselves in Iran’s often misunderstood culture, to learn what it’s really like to be a woman in Iran. Here, Kerina shares some of what she experienced along the way.

When you say “Iranian woman,” most people in the United States assume you’re talking about a closed, meek, uneducated woman, covered head-to-toe (or at least wearing a head scarf), bound to the rules and whims of the man or men in her life. Admittedly, I went into this Iran trip with the same assumptions. Boy, was I wrong.

Learning from an amazing guide

My assumptions were first challenged when we met our guide for this 16-day tour. Mojie, an Iranian woman, was one of the most educated and open women I’ve ever met. She had an amazing knowledge of the destinations we visited, and knew the stories behind every historical site and Persian empire.

Her passion for Iran and its cultures was evident, and she shared it with such enthusiasm that we couldn’t hep but become passionate about it also. And as a modern Iranian woman, she was open to answering our questions and showing us the different sides to being a woman in Iran.

Women in Iran are incredibly well-educated. Mojie told us tales of her friends, their various universities, and their various majors. More women attend college than men, and according to UNESCO data from 2012, Iran has more female students in engineering fields than any other country in the world.

Out and About in Public

We traveled through Iran for 16 days, and in most public places, the younger women we encountered were not much different than American women. They were very stylish, with their hair showing, and appeared to be spoiled by their men. The men and women held hands in public. They were obviously partners—we did not see meek women who had to obey their husbands and hide behind a burka.

We visited a Persian rug shop, where, once inside, the men working there locked the doors and blocked the windows so we could take our head scarves off. These were “modern Iranian men,” so they didn’t care about us wearing head scarves, and they wanted us to feel comfortable inside their store. 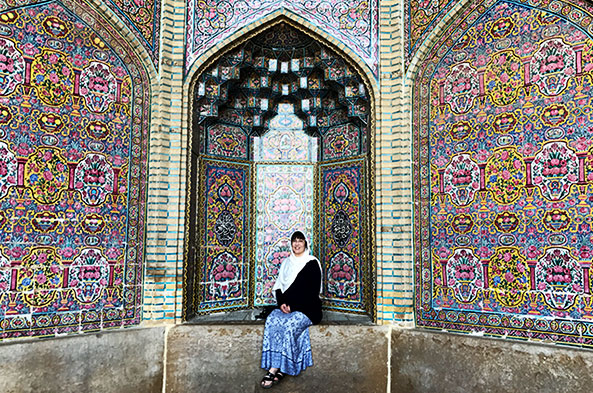 Head-to-Toe Coverage at a Holy Shrine

We stopped at Qazvin to visit the holy shrine of Shahzadeh Hussain, son of the eighth Shiite Imam from the early Safavid Period. Here, women have to be covered from head to toe, so we were given “chadors” (although we felt they made us look more like Jedi Masters than covered women.)

A true highlight of the trip, we spent an afternoon in a buzzing beauty salon filled with local women chattering away and giggling amongst themselves. There wasn’t a lot of air flow, so the fumes from the beauty products were intense. But spending time in the salon was well worth the bad smells.

All of the women had their scarves off, and the beauty salon workers even wore low cut shirts. Some of the women had obviously had nose jobs and bleached their hair blond. (Although we agreed this was a shame, that so many Iranian women were forgoing their elegant Persian features to look more Western.)

To see the local women socializing, free from wraps and scarves, away from the blazing sun, was a truly enlightening experience.