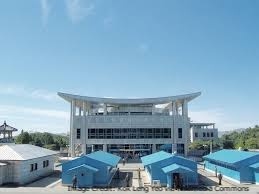 Travel to South Korea: What is the DMZ?

Journey’s first trip to South Korea, Discover South Korea, departs in September 2016. With a full itinerary of history, traditional culture, and modern wonders, a stop at the DMZ was a must-add to our list of things to do in South Korea. But why? And what exactly is the DMZ?

What is the DMZ?

The DMZ was created in 1953, when North Korea, China, and the United Nations signed the Armistice Agreement ending the Korean War. The agreement sought to create a buffer between North and South Korea, requiring the military of each side to maintain its distance from the opposing country. Yet despite it’s name, the DMZ is considered the most militarized border in the world. Patrols from each country monitor the 2.5-mile-wide strip along the entire border between the countries. Though they are forbidden from crossing the Military Demarcation Line that marks the actual border between the countries, they maintain extreme vigilance against any penetration.

What’s around the DMZ?

On the western end of the DMZ, near the west coast of the Korean peninsula, is a facility known as the Joint Security Area (JSA). The JSA straddles the Military Demarcation Line, with large buildings on both sides, plus a row of conference rooms built bridging the line. It serves as an official gathering space for North Korea / United Nations meetings. The JSA also served as the only connection point between North and South Korea until 2007, when a rail line opened on the East Coast of Korea, crossing the DMZ for the first time. The rail line, Donghae Bukbu, carried Korean tourists between the North and South for a year before the shooting of a South Korean tourist closed the line permanently. Talks between the Koreas to open another rail line have been ongoing since then, but no official progress has been made.

Within the DMZ you’ll find two small villages, one on each side of the official border. On the South Korean side is Daeseong-dong, a farming village inhabited by about 200 direct descendants of the village’s pre-war residents. Villagers are protected by the UN and are exempt from taxes and mandatory military service, but are subject to an 11pm curfew, as well as other restrictions.

On the North Korean side sits another small village, know as the “Peace Village.” North Korea maintains that this too is a 200-resident farming village, but in South Korea it’s known as “propaganda village.” Thought to be similar to a Hollywood movie set, the village allegedly contains only empty buildings with painted windows.

From the DMZ, you’ll also see two flags, one in each direction. The South Korean flag began flying In 1980, when the government erected a 323ft flag pole in Daeseong-dong. In response, North Korea erected their own 525ft flagpole in Peace Village, which is the 4th largest flagpole in the world.

What’s underneath the DMZ?

Four tunnels are known to run beneath the DMZ from North to South Korea, the first discovered in 1974. Some say that there are up to 200 more tunnels yet to be discovered.

Most believe that North Korea dug the tunnels as a means of military invasion, although North Korea has officially claimed that the tunnels were built for coal mining, despite the lack of coal in the region. The first and smallest (3ft x 4ft) tunnel discovered was equipped with electricity, weapons storage, and sleeping areas. It was wide enough to accommodate the movement of up to 2,000 soldiers per hour. The next three tunnels were similar in construction, but all larger (7ft x 7ft). None of the tunnels are large enough to allow the passage of vehicles.

The second, third and fourth tunnels are open to visitors at the South entrances. Journeys’ visit to the DMZ includes a tour of the third tunnel.

As they say, when one door shuts, another door opens. In the case of the DMZ, when the buffer was put in place, it created a de-facto wildlife and nature preserve. Aside from the two villages, the DMZ has been nearly devoid of human habitation for over 60 years. This lack of human interference has created one of the world’s most well-preserved temperate habitats.

The geography of the DMZ is incredibly biodiverse, marked by mountains, prairies, tidal marshes, lakes, and swamps. The wildlife diversity is staggering: over 2,900 plant species, 70 types of mammals, and 320 kinds of birds (including both red-crowned and white-naped cranes) have been identified, and there have been sightings of the incredibly rare Siberian tiger, Amur leopard, and Asiatic black bears that live in the area.

Efforts have been made to persuade UNESCO to classify the DMZ as either a part of its Man and the Biosphere Programme or as a World Heritage Site, but the contentious relationship between the North and South has prevented these efforts from succeeding.

Visit the DMZ with Journeys

We included a tour of the DMZ in our itinerary because we believe it helps us better understand the history and fraught relationship of the two Koreas, which deepens our cultural experience and allows us to leave with a more comprehensive understanding of how Korea’s past has shaped its present.

Join us as we travel to South Korea for 11 rich days of learning, reflection, photography and cross-cultural interaction.