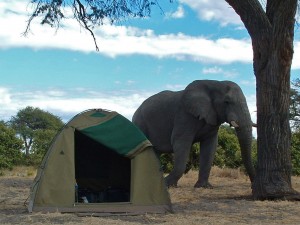 Camping in the Okavango 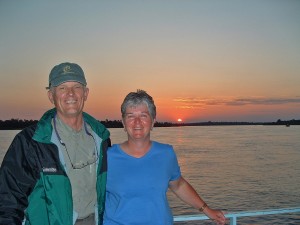 It started at a South African inn located on the outskirts of Pretoria. The inn also rescued lions, which you could pet through the hog wire fence. We had to watch our camera strap because they would paw at anything that moved. Three lions were headed to the San Diego Zoo in a week or so. They would be quarantined for weeks upon arrival at the zoo but, here at the inn, all you had to do was reach through the fence.

We were going camping in the Okavango Delta. Spike (skinny guy) and Slab (not-so-skinny guy) run a camping operation based in Maun. Water dripped from the radiator of the Toyota truck as they loaded it with gear. We had small seats on either side of the bags. Innocent (tent man) had to sit on the luggage between us. A canvas tarp kept off the sun. Loaded to the hilt with our bags, extra gas tied to the back, and a sense of adventure in tow, we set off.

The water in the Delta had progressed farther than usual as we boarded the small metal boat for the three hour trip to our first camp sight. As we took off, the lawn chairs we were sitting in tipped back as the boat scooted out under them, and we ended up flat on our backs! It was a good to start to an excellent trip.

The boat paths through the Delta ranged from just wide enough for the motor to many feet. Hippos and crocodiles were common. Not so common were elephants, giraffes, and water buffalo but they did not disappoint. On a straight stretch of open water we actually hit a hippo and became airborne for a split second!

The camp site was located fairly close to a very small termite-mud village. A troop of baboons made a regular traverse just out of the immediate camping area. At night you could watch them jostle for the best sleeping branch in palm trees maybe 200 feet from our tent.

In the morning, we discovered footprints in the dust between the tents that belonged to a good-sized hippo. At night you could follow the lion pride as it moved around you from the calls of the males. The last night an elephant walked though the water only feet from the tent. The days were spent walking over several small islands looking for game. We were the only tourists for what seemed like miles around. If nature called in the night you needed to check to be sure there were no eyes looking back at you. Several nights we could hear village dogs barking at the hyenas that came for their chickens. We slept to a chorus of sharp clicks from small, green, frogs looking for love in the Delta.

From there, it was back through the Delta and back onto the pile of luggage in the back of that truck.

We drove for many miles through the bush and you had to be careful not to stick your head out too far or you would be smacked by a passing branch. Hornbills flew alongside and several times we came across elephants, most of whom did not welcome our presence.

In Savuti, we had set up camp when an elephant came to call. It seemed more interested in our cornflakes on the table than anything else, but there is nothing like having a wild elephant come to dinner.

You can stay in a hotel or tented camp and be more comfortable but you can’t hear the frogs. You can’t hear the lions, and you won’t have an elephant walk past your tent. You can ride through the bush in an air-conditioned car and be more comfortable but you will miss the wind in your face, the dust, and the birds close enough to touch. You can ride in an enclosed vehicle and not have to worry about a lion deciding you should be lunch, but then you will miss the thrill of the possibility. You can have a softer ride but you will miss the bumps and the sound of the wheels on the gravel road. For me what you give up is not worth the comfort. You can take a shower in the privacy of your own room or with a troupe of baboons watching your every move. You will have a meal on a table and miss Jane’s meal cooked over an open fire. You will miss one of the best stories you can get in Africa.