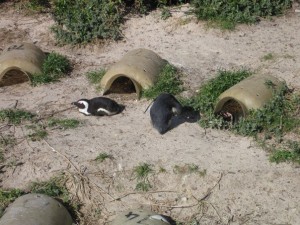 In August 2010 Journeys International President Robin Weber Pollak and her husband Joe Pollak traveled to Southern Africa to scout it out for future trips and to celebrate Joe finishing law school. Joe wrote this post about his trip to Capetown and the Western Cape in South Africa.

Robin and I landed in Capetown after a brief flight from Namibia. The theme of our trip to Southern Africa was self-drive, but while we are in Capetown we enjoyed the services of a guide/driver. This was definitely a good decision because the combination of driving on the left and navigating through city traffic might have been too much for me. 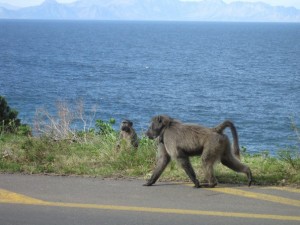 We spent the first day in Capetown with Pepe, our guide/driver and she took us on a driving tour of the cape. At Cape Point (slightly further south than the Cape of Good Hope) I got pretty excited for the funicular ride up to the precipice, but after we bought the tickets we were instead directed to a Hertz minibus. Plus, it’s only ¼ mile walk. Disappointing. But the view from the lighthouse was good.

Driving in the Western Cape was very similar to driving in North America. Aside from driving on the left side of the road, the highways are modern, maintained, and well signed. There was, however, one major difference between driving in the Western Cape and, say, driving on a state highway in the Midwest United States: we encountered a baboon-initiated traffic jam. Yes, traffic has stopped because baboons are jumping from car to car. We kept the doors locked and the windows up because baboons can be very aggressive, especially when they think that food is nearby. After a short time, two park rangers came by and encouraged the baboons to leave the road and return to the trees.

The highpoint of the day was our stop to see the African Penguins at Boulder’s Beach. These birds are also known as Jackass Penguins because of their braying call. African Penguins are an endangered species due to historic egg collection activities, human encroachment, and, unfortunately, habitat destruction from oil spills. This particular colony settled at Boulder’s Beach in the 1980s and the government of South Africa has now closed the penguin’s part of the beach and taken other measures to encourage breeding and restoration. We saw several hundred or maybe a few thousand penguins sunning on rocks and diving for fish.

All of this penguin focus does not sit well with the neighboring landowners who formerly owned beachfront property and now own penguin-front property. Tourists, like us, disrupt their street on our way to see penguins and the landowners are now restricted from accessing the beach nearest to their front doors. I did notice that some houses were set up to sell refreshments from the front yard, so perhaps some humans have adapted to the presence of the penguins.

We spent the evening walking around downtown Capetown looking at the massive buildup for the 2010 FIFA World Cup which ended a few weeks before our visit.

Robin had business meetings all day, so I spent my day traveling on my own through Capetown.

Table Mountain towers over the city and the line for cable car tickets forms early. It took me about an hour to purchase a ticket and board. Advance tickets are available for a small fee, so we will have our guides arrange advance tickets for future JOURNEYS travelers. There is a majorly strenuous hike available up the mountain as an alternative to the cable car, but on top of the mountain there are several easy trails, a gift shop, and a great view of the entire area.

I grabbed a taxi for the short drive down the mountain to the Castle of Good Hope. The castle is the original fortification for the city. There does not seem to be any particular historic event associated with the castle, but it remains the ceremonial headquarters of the South African Navy. I watched the noontime changing of the guard ceremony complete with the firing of a cannon. A checked out the small museum of South African military history but my particular interest, the World War I and World War II galleries, seemed to be under construction when I visited.

However, the main reason to visit the castle was completely unpublicized. Inside was an artist colony where several artisans have working space. Most of the artists have small inventories. I stopped to chat with a watercolorist and bought a painted postcard.

The South African Jewish Museum is on the campus of the original Capetown synagogue, next to Company Gardens. These exhibits were the best designed of any of the South African museums that we saw. It seems that most South African Jews were involved in the ostrich feather trade. However, during World War I, the fashion industry’s demands for feathers evaporated as factories were converted to producing uniforms and more pragmatic clothing. If you are interested in this subject, I recommend Adam Chandler’s interesting article about South African Jews immigrating to the United States and settling in Houston, Texas.

The museum is in a formerly Black neighborhood that, under Apartheid policies, was declared to be a Whites-only zone. The museum focused mostly on personal recordings of memories and a collection of artifacts collected from demolished houses. Nelson Mandela was elected President of South Africa in 1994, so our trip was less than 20 years after the end of Apartheid. The museum has limited discussion of the perpetrators of Apartheid, but considering that many people who lived through the era are still alive, it is understandable that the museum exhibits might be circumspect.

Although the Western Cape lacks the large game – lions, giraffes, buffalo, etc. – of the African savannah, Capetown has a lot to offer. I enjoyed both sightseeing in the big city and nature touring along the coast. Although we did not visit on this trip, the former prison on Robben Island is on the UNESCO World Heritage List. However, personally, I would have gone to Capetown for the penguins alone.

JOURNEYS International offers custom departures to South Africa. Joe says that on his next trip to the Western Cape he wants to re-visit the penguins so that he can perfect his penguin walk.