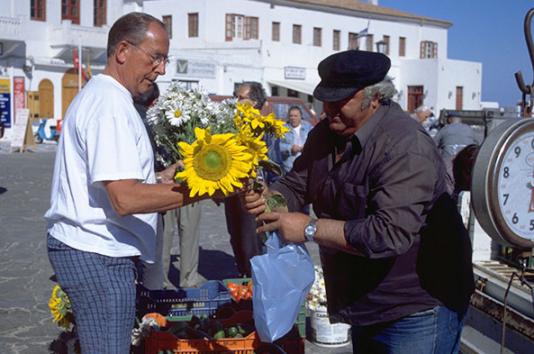 “Cash is king,” so they say, and it really is true in some parts of Europe where you may find credit card acceptance to be less common than city-dwelling Americans are used to. Still, we don’t recommend that travelers rely exclusively on cash, particularly if it means that you would end up carrying excessive amounts of cash in your pocket. Also, while most vendors will take cash, if you are traveling in the trendier parts of big metropolitan areas then you may encounter some shops and restaurants that only accept credit, debit, or electronic payments.

It can be hard to remember a time when crossing borders in Europe also meant exchanging one local currency for another, but that’s what it was like before 1999 when the European Monetary Union established a common currency for most of Europe. These days, nineteen countries use the Euro including Austria, Belgium, Cyprus, Estonia, Finland, France, Germany, Greece, Ireland, Italy, Latvia, Lithuania, Luxembourg, Malta, the Netherlands, Portugal, Slovakia, Slovenia, and Spain.

Having one unified currency for so many countries does make travel simpler, but with many different options for methods of payment, between cash, credit card, and new options, like contactless payments, it can still be confusing to know how to get the best deal. This blog post will tell you your options and give you tips on how to get the most bang for your buck. We look for opportunities to acquire Euros that gives the best return (favorable exchange rate; low fees) while taking into account other potential transaction costs (security considerations; time). If you are still confused or if you need help planning your next amazing vacation to a destination in Europe, then contact Journeys International and one of our adventure specialists can help you out.

Before You Leave Home

Surprisingly, a U.S. bank branch might be your best option for acquiring Euros. If your accounts are exclusively at an online-only financial institution or you use a small credit union, then this might not work, but we have found that full service, national banks can usually provide account holders with Euros. You may need to visit a branch in person to make the request and then plan to return a few days later to pick up your Euros so this technique requires a little planning ahead. We’ve found the exchange rates offered by U.S. banks to be as favorable as other options or so close that the difference is immaterial.

From an ATM at Your Destination

The next best option is to use your ATM card to withdraw cash once you arrive. You should still get a favorable exchange rate this way, but it’s impossible to avoid every fee. You will certainly pay a 1% fee to the company that owns your card’s network (i.e. Mastercard or Visa) for the privilege of conducting a foreign currency transaction. Your bank may also charge a foreign transaction fee or an out-of-network ATM fee or both. Usually fees like that end up being a few dollars, so still relatively low. By using an ATM, you do run some additional risks, though, including the risk that your ATM card number is surreptitiously stolen by a card skimmer installed by a thief or that criminals may lie in wait near an ATM to target hapless travelers. Of course, these same risks exist when you use an ATM at home, too, it’s just that when you travel to new and unfamiliar places, it can be harder to notice suspicious activity.

There’s one more thing to look out for with international transactions at ATMs: “Dynamic Currency Conversion.” It’s hard to call this a scam because it’s likely legal, but it may be confusing and can result in your getting a much worse exchange rate than you are due. In a standard transaction, you ask the ATM to withdraw 100 Euros. The ATM sends an electronic request to your bank for 100 Euros. Your bank approves the transaction and performs a currency conversion to debit your account in dollars for the equivalent amount.

Dynamic Currency Conversion works like this: you ask the ATM to withdraw 100 Euros and the ATM shows a screen asking you whether to complete your transaction in dollars or Euros. The ATM is asking for permission to insert itself into the currency conversion. If you accidentally say yes then you are giving permission for the machine to apply its own currency exchange rate a few seconds earlier in the transaction and it’s all but guaranteed that the machine’s rate is worse than your bank’s rate. Proponents of Dynamic Currency Conversion claim to be providing a service by displaying a withdrawal in dollars, but we think that is a service that has dubious value and which savvy travelers can decline. You want to say no to these innocent-sounding offers so that the currency conversion is handled by your bank and so that you get the best exchange rate.

All in all, withdrawing Euros from an ATM is usually easy and low-cost.

Put Everything on Plastic

Some travelers decide to eschew cash entirely and try to put their whole trip on a credit card. These days both U.S. and European credit cards feature a security chip, but U.S. travelers may still run into an incompatibility problem from time to time. European consumers authorize payment by entering a PIN while U.S. cardholders sign a receipt. Most credit transactions with a cashier will go through just fine using a U.S. card and if there is some problem, then the cashier should be able to resolve it. However, credit card acceptance is much lower in certain parts of Europe than in the U.S. For example, one of the major Dutch grocery stores accepts debit cards from the Netherlands, but not credit cards from the U.S. or anywhere else. Automated points of service, like the kind of machine that spits out a public transit farecard or train ticket, can sometimes be incompatible with U.S. cards, too, and the alternative is frequently a long line at the customer service desk. Also, in some places, credit card payments may result in the merchant charging a fee to cover the cost of processing the transaction, a practice that you may not expect since it is far less common in the US.

Despite these possible downsides, if you are sticking to major cities, then you may find it possible to put everything on your credit card with only a few exceptions where you need cash. Someday, contactless payment (Apple Pay, Google Pay and the like) will probably resolve many of these compatibility issues, as there will be just one system for both U.S. and European cardholders. Contactless payments are not yet available in every country, though, and the ones that do have it tend to see adoption mostly in major urban areas.

Cash Exchange – Only If You Have To

Exchanging cash may be necessary if that’s the only option or in an emergency, but we suggest that you only plan to exchange dollar bills for Euro notes as a backup plan. The exchange desk in the airport will often not give you the most favorable rate. You might run across a few tourist-oriented shops that accept U.S. dollars or will do an exchange, but most will not and those that will, you guessed it, won’t offer the most favorable rate and sometimes have sneaky fees. You may also find store owners to be picky about only accepting pristine bills in certain denominations.

Travelers checks are passé. You pay a fee to acquire them and while you may find a retailer who begrudgingly accepts travelers checks, many won’t, which means you will be left searching for a bank to make an exchange during bankers’ hours and wasting time during your vacation.