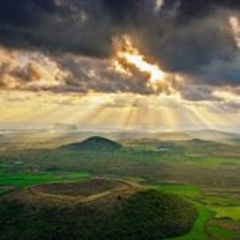 Looking for things to do in South Korea? Visit Jeju, the “Secret” Tropical Island

The Maldives, Fiji, Tahiti, Bali… There are some tropical islands that get all the attention. But if you’re looking for something more off-the-beaten path and less touristed, we’ve got the answer for you: Jeju Island, South Korea. We love it so much that we included two full days on our Discover South Korea itinerary; here’s a glimpse of what you’ll experience.

At 714 square miles, Jeju Island is the largest island off the Korean peninsula. With a humid subtropical climate, Jeju Island stays warmer than the mainland year-round, and is a can’t-miss on the list of things to do in South Korea. It was formed by the volcano Mt. Hallasan, now a UNESCO World Heritage Site.  Although the last eruption is dated at about 5,000 years ago, the volcano is considered “active” since the cutoff for last eruptions of “dormant” or “dead” volcanoes is 10,000 years.

On the Discover South Korea trip, your first stop on Jeju Island is Hallim park, one of the most popular destinations on the island. Here you’ll see the beautiful stone and bonsai, water, and subtropical botanical gardens. Next, head for a hike at Suwolbong Peak, a geopark highly regarded by volcanologists and geologists for its impressive tuff ring—a volcanic crater with a high rim. (If the weather isn’t cooperating,  skip the hike and instead visit the O’Sulloc Museum to learn about traditional Korean tea culture.)

After, visit Spirited Garden, touted as one of the most beautiful gardens in the world. Opened in 1992, the park is the world’s largest botanical garden and boasts over 100 species of rare trees, including bonsai trees as old as 500 years. On your way, see history spread before you as you pass Althr airfields, used by the Japanese in WWII.

The  last stop of the day is another opportunity for an exhilarating hike, this time at Mt. Sanbang. The result of violent volcanic activity about 800,000 years ago, the mountain has three features you don’t want to miss: first,  a cave (the mountain’s name translates literally as “a cave within a mountain”), just 500ft above sea level; second, the most spectacular views overlooking the ocean; and third, two temples, Sanbangsa and Bomunsa. You will be able to tour both temples (conveniently located a mere 10ft apart) and see the relics of Buddha that they’re known for.

Can’t hike because rain gotcha down? No worries, we’ve got a fantastic back-up plan: either stop at Cheonjeyeon Falls (The Pond of God), a three tiered waterfall that originates from a cave, or visit the Teddy Bear Museum, where there is an impressive variety of bears from all over the world, plus fantastic views of Jeju Island.

Today’s a new day and it’s time for more exploring! The first stop is the National Monument Sangumburi Crater, a flat crater with a circumference of over one mile. A walk throught the crater will reveal the wide range of plant life, from evergreens to magnolia trees to mountain strawberries. Or if you’d rather, test your vision at the Trick Eye Museum, the first museum in Korea to display optical illusion art. Due to the art’s unique 3-D nature, you can take photos posing with the art—but your photos will make it look like you were actually inside the art.

Next up is Seongeup Folk Village, a small cultural village located at the foot of Mt. Halla. This traditional village is a great place to learn about the ancient cultures of Jeju Island and its long-standing traditions. Unique to the village are the black lava rock walls, curvy alleys that block the wind, and the stone grandfather statues (Harubang). Depending on the weather, either visit with the Haenyeo (literally “sea women”), the female divers who have been collecting clams, abalone and seaweed without the benefit of modern diving equipment since the 17th century, or visit the Haenyeo museum to learn about their incredible skills.

After your time in the village, explore Sungsanllchulbong Peak, which rose from below the sea after a volcanic eruption over 100,000 years ago. At the peak of the mountain, there is another large tuff ring, about 2,000 feet in diameter.

End the day with a drive along Jongdalri Shore Road for incredible views overlooking the ocean, then visit Manjanggul Cave, a UNESCO World Heritage Site. The cave is a lava tunnel, formed when lava deep in the ground spouts from the peak and flows to the surface. Inside you will find stalagmites, stalactites and the many bats that make the cave their home. Just a half mile of the cave is open to tourists, but it is considered one of the best examples of lava tunnels in the world.

How much do you know about this rarely-visited, diverse, engaging country?
Take our quiz to find out!