Travel to Iran: Are you crazy?

When we announced to various friends that we were going to travel to Iran, the most common responses were stunned silence or an emphatic, “Are you crazy?” That opinion was not universal, but it was certainly the majority. We were variously accused of being reckless, naïve and foolish. Those respondents, good people all, likely entertained visions of “Death to America,” jailed journalists or grisly beheadings. The problem with all such visions, though, is that they are generally drawn in very broad brushstrokes and often with incomplete information. Happily, our Iran sojourn was, as we expected, the antithesis of their worst imaginings.

A book full of highlights

The two weeks we spent in the old Persian Empire with a dozen or so fellow travelers contained highlights enough to fill a book: the astounding traces of ancient kings and empires in the columns and carvings and tombs of places like Persepolis and Bishapur; rugged mountains and vast deserts dotted with timeless villages and nomadic herders with their flocks that could have stepped from pages of the Bible; the centuries old architecture of bridges and palaces in cities that have been centers of civilization and remain bustling metropoles filled with people and energy and incomprehensible traffic; and, of course, stunningly beautiful mosques–impressing on every scale from the majesty of towering minarets and soaring, elaborately tiled domes, to the understated beauty of millennia old prayer halls or the gentle touch of colored morning light filtering through stained glass.

Vivid memories of the friendly people 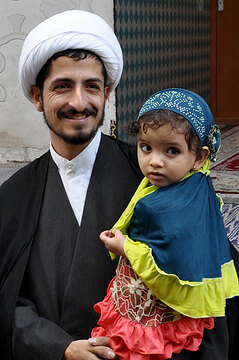 But the most vivid memories are of the people—so friendly and warm and enthusiastic about welcoming us to their country. There was the farmer who discovered us wandering in his pistachio grove, our bus parked at the side of the desert highway, and insisted on showering us with the fresh fruits of his trees; the artisans, passionate about their ancient crafts and anxious to demonstrate them; the countless men and, especially, women, who would ask where we were from and, on hearing America, would excitedly pull out cameras or phones and pose for pictures. And there was the night in Esfahan that Diane and I sat in Imam Square in front of the Blue Mosque, soaking up the murmur of happy sound all around us—families picnicking, children playing volleyball, water splashing in the fountains. As we sat, two young girls plunked themselves down next to us with a cheery “hello.” The older one commenced to regale us in rapid fire Farsi, pausing momentarily with a look of deep thought each time we apologized (in English) for not understanding, before brightening and launching into yet another verbal volley. This happy bit of language-challenged communication continued for several minutes at which point we all exchanged equally cheery “good byes” and they bounded off. Lovely!

Iran is a complicated country and the internal struggle to shape its post-revolution identity is ongoing. Intensely proud of its culture and heritage, it’s a nation that presents great challenge and great opportunity on the world stage. Neither should be underestimated. But the perspective gained by spending time in-country, relating with ordinary Iranians, leaves this traveler with a sense that the challenges are far from insurmountable and the opportunities boundless. For me, the hope and potential for a brighter future were suggested in the words of a local imam who stopped by our table one evening as we ate dinner to say, ‘Thank you for coming to Iran; you are very welcome here; and please, don’t pay too much attention to our politicians.’  Visiting each other’s countries and interacting with each other on a personal level won’t solve everything that lies between us, but it’s a good start.