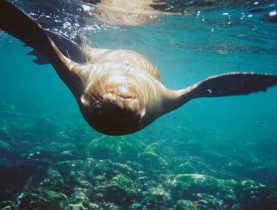 Journeys traveler, Bill Reed, talks about his experience in the Galapagos. 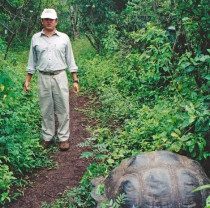 We stood at the small (tiny, actually) airport waiting to process into the Galapagos. We were going on an 8 day trip on a 77 ft motor launch. We struck a conversation with the people standing in line with us. The man’s name was Rip and was an ER Dr. from Fort Worth, about 30 miles from where we live. As it turned out, he and his wife were on our boat, and actually, the four of us were the only people on the boat! Four of us and a guide on a boat designed for sixteen. We have never had such personal service in all our travels!

Over the course of the trip, we traveled to most of the islands. The islands, themselves, are large but the area you can walk in is very small and tightly controlled. They have set out a series of short stakes painted black and white that denote the path you are to stay on. There is a limit to the number of people that can be on the islands at any one time and a limit to the size of the groups. This may sound restrictive (and it is) but it is a good thing. You are not up to your neck in other tourists but still get access to the animals you came to see in the first place. 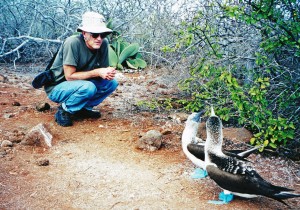 Imagine going to a zoo with no fences and the animals don’t really care you are there. Blue footed boobies were nesting in the path, and we had to carefully step over them to get past. They did not leave the nest but pecked as we moved on. The ubiquitous marine iguanas were not so tame and kept their distance of 5-8 feet. This was a good thing because they clear salt by blowing it out their nose and there is nothing like salty iguana-boogers all over your arm! The sea lions would come within inches of your mask as you snorkeled only to turn away at the last moment. This was a little unnerving at first but great fun after the initial surprise of having a sea lion staring you in the face. They never showed any aggression and were inquisitive when on the beach. 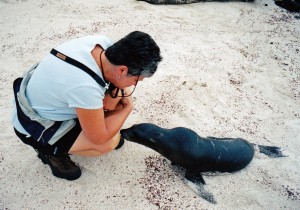 Fearless baby sea lion with my wife’s binoculars. We were cautioned not to touch it (human smells, etc.) but it was OK if it came to us. The baby had been nursing as the mother slept only feet from where we sat.

Each island is different with different animals on them, but in each case the feeling you were invisible to them was the same. There were nesting frigate birds at arm’s length on one island to giant turtles on another. Each day was a new experience.

This is a place that should not be missed. There really is no other place in the world like the Galapagos.

You eat and sleep on the boat and I would recommend the smallest boat you can afford. The larger boats hold about 80-90 people but are under the same restrictions with respect to the number of people that can be ashore at one time. With a small boat you are under the same restrictions but there are so few of you it doesn’t matter.
The galapagos is known for large tortoises!
When we were there the water was cold and we needed the 3ml wet suits we brought. The travel pictures show people just swimming in the water but don’t believe it! The water can be quite cold.

If you like animals and wonder what it might have been like before people transformed the land, you need to go to the Galapagos. Here you are just another animal walking among the island’s animals.

My advice: go with a small group and spend as long as you can.