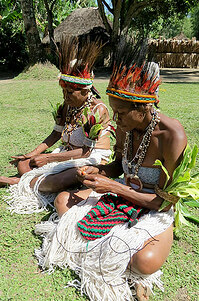 Papua New Guinea festivals are known the world over, but this island nation has so much more to offer. We traveled outside of festival season to explore its unexpected charms.

The people of Papua New Guinea have a generosity of spirit that showed in the way they invited us into their homes and communal spaces, sharing food, showing us their traditions and making us feel at home. They were all incredibly kind and welcoming.

Their homes were very simple and communal. Outside of the few major cities like Port Moresby, Papua New Guinea is an incredibly rural country. Most villages consist of thatched roof huts with dirt floors, no electricity and no running water. For us, it seemed they have so little, but really, they have all they need, and villagers were quick to invite us in and share in their wealth. And unlike traditional American culture, they were very physically affectionate, welcoming us like family. 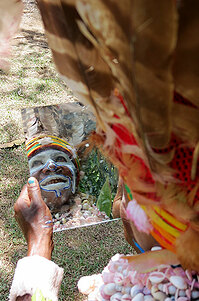 There are an estimated 7,000 distinct cultural groups, or tribes, in Papua New Guinea, most with their own language, and many with distinct “sing sings.”

These sing-sings were developed to maintain peace between tribes. A sing-sing is a gathering of several local villages where they meet and exchange culture, dance and music, most often in a competitive format. Each tribe brings their best songs, dancers and costumes to show off their unique culture.

The Goroka Show, a large sing-sing named for and held in the capital city of the Eastern Highland Province, gathers about 100 tribes each year around the time of the nation’s independence day (September 16). The Goroka show is considered the largest cultural event in Papua New Guinea and draws spectators from all over the world. Although we did not travel to Papua New Guinea during a festival time, in each village we visited the people were eager to show us their festival clothing and demonstrate their unique song and dance traditions for us. 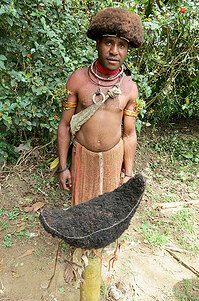 The Huli tribe is the largest ethnic group in the Highlands, inhabiting nearly the entire Tari region. They are known for their custom of wearing elaborate woven wigs, some decorated with large feathers and other embellishments for ceremonial use such as sing-sings and other festivals. These wigs are made by a clan known as the Huli Wigmen.

The Wigmen live apart from the rest of the tribe. Unmarried virgin boys who choose to become Wigmen are sent to live at the wig school at the age of 14, paying for tuition with either money or pigs. They stay anywhere from 18 months (to grow one wig for personal use), or up to 10 years to grow many wigs for themselves or to sell. The wig schoolmaster is considered a shaman and the process of growing each wig includes magic rituals, strict diet and close supervision from the master.

Once grown, the hair is given to a wig specialist who sews and weaves it into elaborate headdresses, either for the boy to keep for personal use, or to be sold in the market to men who have not grown their own wigs. While the wig school itself is not open for outsiders, the Wigmen graciously came to meet with us and showed us some of their rituals that are open to outside viewing. 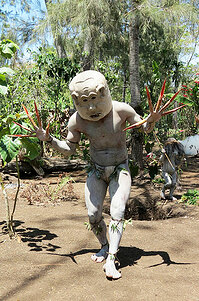 The Mudmen hail from a village along the Asaro river, near Goroka, in the Eastern Highlands. Legend has it that the men of the village took refuge in the muddy banks of the river after being defeated and driven out by an attacking tribe. They spent the night in the mud and returned in the morning to see what was left of their village. They did not know that the enemy tribe was still there, nor did they know that the mud covering their bodies made them appear as ghosts. When the men arrived in the village, their enemies believed they were seeing the ghosts of the defeated villagers and fled. The villagers rejoiced at their luck and the Asaro Mudmen were born. Today, the Mudmen are a beloved cultural tradition, making appearances at the yearly Goroka show and offering both village tours and frequent opportunities to see traditional dance performances. 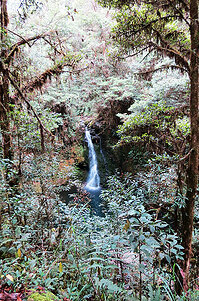 Papua New Guinea contains a lush and diverse eco-system. Because of the remote location of the island, and the ruggedness of the terrain, much of the nation’s biodiversity has remained untouched and intact. Mountain forests, coastal mangroves, savannas, and lowland rainforests can all be found here.

Unique to Papua New Guinea are eight species of tree-kangaroo. Cousins of the Australian kangaroos, these kangaroos evolved to climb and live in trees instead of bounding across plains. Also, there are thousands of species of orchids and a myriad of exotic birds, including the bird of paradise.

Papua New Guinea has a rich tradition of unique hand-made crafts. All along the Sepik river, tribes have international reputations for their intricate wood carvings and clay-based sculptures, including masks.

The women of PNG are especially known for a type of woven bag, known as bilum. A bilum is hand-woven with (usually plant-based) string using a looping process similar to crochet. The colors, designs and materials vary by region and are often tribe-specific.

Immerse yourself in Papua New Guinea

You’ve read the reasons to visit Papua New Guinea, now see them in action. We’ve gathered the best videos into one place for your viewing pleasure.