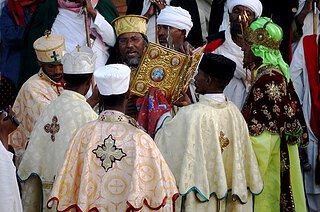 Think ahead to January 7, 2017 and imagine what you’ll be doing. It’s the first Saturday after the US wintertime holidays, school is back in session, and most adult schedules have returned to a routine. But in Ethiopia, the celebration has just begun! Travel to the Timkat Festival and Genna Festival in 2017 and avoid that inevitable post-holiday lull.

Celebrations in January (thanks to Caesar)

The Ethiopian calendar follows that established by Julius Caesar in 46BC. The length of a year in the Julian calendar is very slightly longer than the length of a year in the Gregorian calendar now used worldwide. Over hundreds of years, the difference between the two calendars has grown to thirteen days. While many Christians around the world celebrate Christmas on December 25, in Ethiopia Genna festivities take place almost two weeks later on January 7. Epiphany is celebrated by most Christians on January 6; this holiday, Timkat in Ethiopia, takes place there on January 19.

The term ‘Genna’ comes from the Amharic word for ‘imminent,’ a reference to the birth of Christ. The Ethiopian Orthodox Church initiates the holiday rituals with a period of fasting that begins for priests as early as November. On the morning of January 7, people rise in the early morning and dress entirely in white. A candle-lit procession and a three-hour church service mark the beginning of the day’s events.

Special food marks the unique character of the day, as do traditional sporting games enjoyed by the men and boys of each village. Small presents may be exchanged among family members, but gift giving isn’t the focus of the holiday.

Twelve days following Genna, Timkat celebrations mark Jesus’ baptism in the Jordan River; this holiday is the most important date on the Ethiopian Orthodox calendar. The Tabot, a symbol of the Ark of the Covenant, is taken from each village church, wrapped in ceremonial cloth, and carried on the priest’s head to the water in a procession that begins as early as 2:00 am; revelers follow priests wearing don shammas, long cotton wraps, creating a sea of white-robed worshippers.

The body of water is blessed and sprinkled on the congregation before some people enter the water to renew their own personal baptismal vows. The Timkat ceremony concludes when the Ark is returned to its church home after a rousing return procession; further festivities can last three days.

Genna and Timkat traditions have persisted for hundreds of years among Ethiopians, one of the oldest Christian peoples in the world. Journeys traveler Dona Malan said that witnessing the holiday celebrations was a favorite part of her trip to Ethiopia this past year. Perhaps it will be yours as well!

Travel to Timkat Festival and Genna Festival with Journeys International!
The 2017 trip is scheduled so that travelers can observe and enjoy both holy celebrations. Want to learn more?

Tell me more about travel to Ethiopia