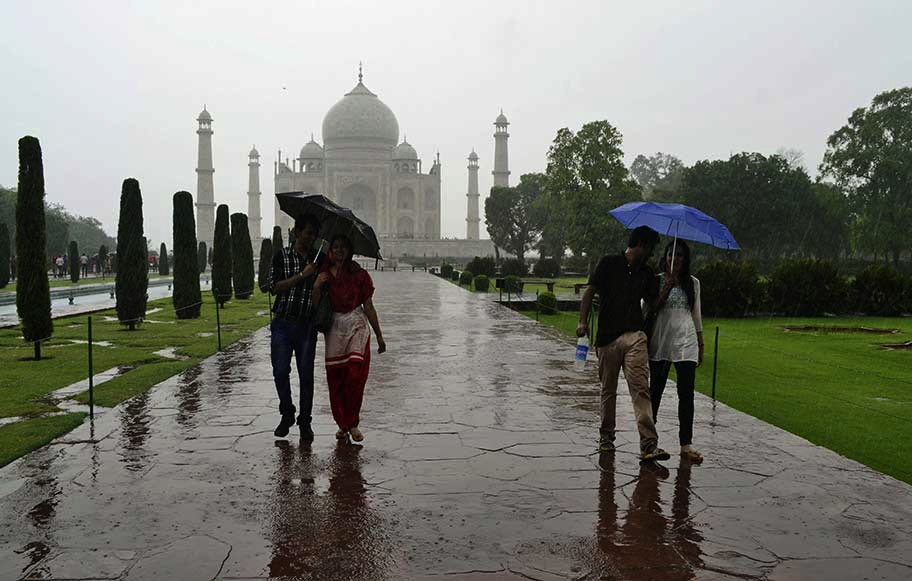 The Indian Monsoon has hit India with full force. Normally, the monsoon, sometimes called the Asia Summer Monsoon, begins around June 1 in the south of India and moves north. This year it is a bit more intense and has moved north more quickly than normal. For most Indians it is a joyous time marking the end of the hot season and holding the promise of good crops in the coming months. If you visit India or Nepal between June and August you can expect frequent showers and some possible transportation delays, but temperatures are more moderate than April and May, and there are very few foreign tourists, as evidenced in this image of India’s most popular tourist attraction, The Taj Mahal.
In recent years, erratic changes in the monsoon combined with depletion of forest cover and poorly planned power and irrigation development schemes in the Himalayas have resulted in massive flooding that has already claimed more than 1,000 lives in northwest India, many of them Hindu pilgrims in the state of Uttarkhand. Potential travelers to the Himalayas should note that more eastern Himalayas of Nepal, Bhutan and Burma have not experienced the catastrophic flooding noted in the western part of the range.

For more details on the making of the Indian Monsoon and the importance of the monsoon to all of life in South Asia, see the PBS website.

Read some recent studies of the monsoon by the Potsdam Institute.

Current update on the 2013 Indian Monsoon.

Border Report: Which Countries Are Open for Travel? (Updated Weekly)