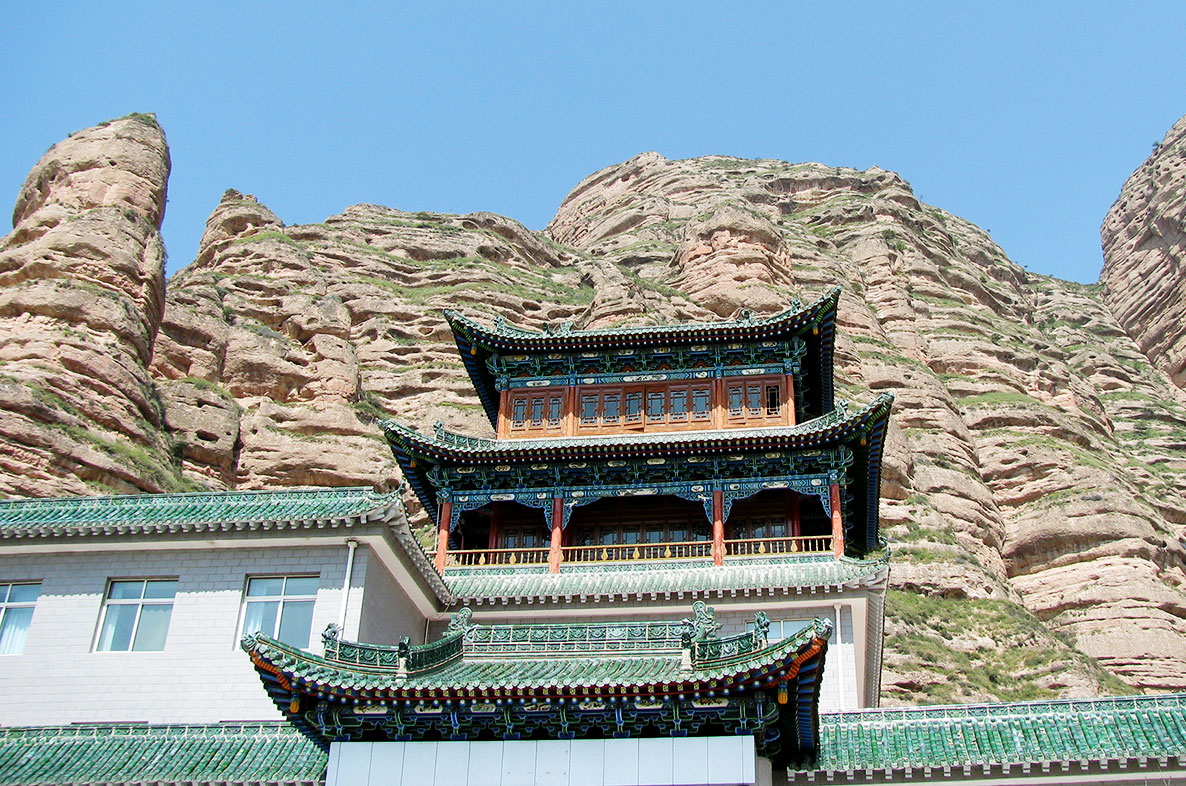 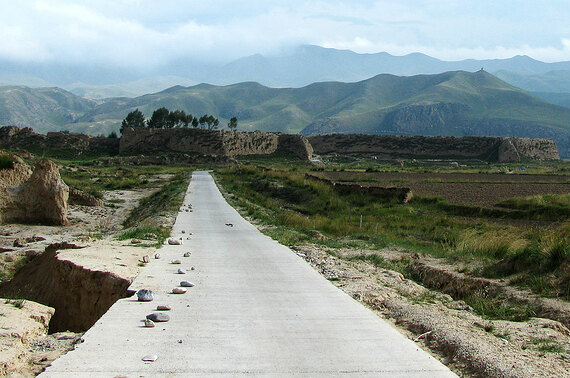 Those of us in the West have long believed that “all roads led to Rome.” While that may have been true for a few centuries in the tiny region of the world known as the Mediterranean, for millennia from the Middle East and beyond, all roads truly led to China.

The vast network of trails across the Eurasian continent that brought diverse peoples, beliefs, and goods to and from China made it the Middle Kingdom—the center of all the world.

Next to the Great Wall of China, the Terra-Cotta Warriors are possibly China’s most famous attraction, yet they were only discovered by accident in 1974, when local farmers digging a well brought up the clay head of a soldier.

Built in the 200s BCE for megalomaniac Qin Shihuangdi, who unified China after centuries of warfare through often brutal and unscrupulous means and became its first emperor, this massive underground complex has over 6000 individual warriors, chariots, horses, and weapons, and has still not been fully excavated. The emperor’s actual tomb, said to contain rivers of mercury and booby-traps suited to Indiana Jones, is buried beneath a huge manmade hill that rises from the fields just beyond his clay army. It was said he killed so many people in his quest to unify China and wield absolute power that he believed he needed an army to protect him from their angry spirits in the afterlife.

His reign marked the beginning of China’s imperial period, and the rise of Chang’an (modern Xi’an) to its position as the greatest city on earth and the terminus of the Silk Road. No trip to western China is complete without a visit here. 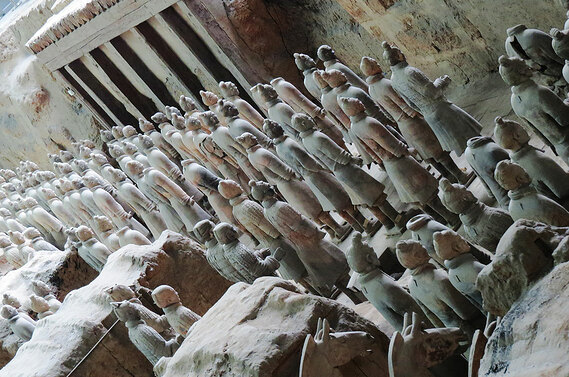 As China’s imperial and economic power increased over the centuries after Qin unified the country, more and more goods and peoples began to flow into the Middle Kingdom, and with them came new ideas and beliefs.

In the late Han Dynasty, the emperor Mingdi supposedly had a dream about a Golden Man, and he was told this was the god of the West known as Buddha. After sending people on several missions across the Himalayas, he had acquired information, scriptures, and even monks to teach about this god. Buddhism rapidly took root in China.

By the fifth century, these grottoes were under construction in natural caves along a canyon of the famed Yellow River, demonstrating China’s devout faith and deep connections with lands to the west. For over a thousand years images of Buddhas, bodhisattvas, and demons and saints were carved into the cliffs and sculpted out of clay, each grotto being almost a temple unto itself. Among the nearly 1000 sculptures is the Great Maitreya Buddha, which stands nearly 100 feet tall and is carved into the side of the canyon. 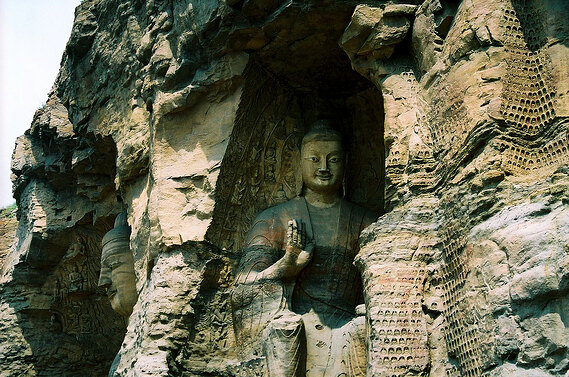 On the edge of the Gobi Desert, for more than four thousand years, Dunhuang has served as the gateway between China and the lands to the West. Occupying a critically important position near the junction of the Northern and Southern routes of the Silk Road, Chinese garrisons were established here as early as the Han Dynasty. By the first century BCE, the Great Wall itself was extended to protect the town and travelers from raiders.

The famed “Singing Sands” of the Gobi dunes, so named for the sound made by the grains of sand as the wind blows over their ridges, were noted by even the earliest travelers. Over the centuries the dunes have advanced, burying untold archaeological treasures beneath their sands.

Enjoy the beauty of this stark and forbidding landscape, and spare a thought for the intrepid travelers and merchants who trod these same trails, as you watch the sun come up over the dunes from the back of a camel. 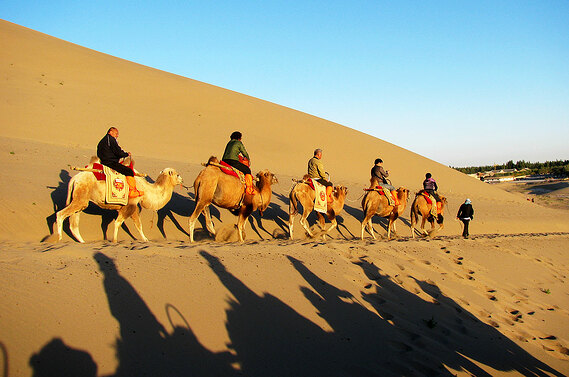 Forgotten by the outside world until the early twentieth century, when a local Taoist monk took it upon himself to protect the priceless treasures within these caves, this UNESCO World Heritage Site is a poignant reminder of the hopes and fears of the thousands of travelers who passed through Dunhuang.

Whether in relieved gratitude for a journey successfully completed, or in anxious anticipation of the dangers to come with the crossing of the desert, from the fourth century CE over the next thousand years devout Buddhists left offerings that led to the development of whole monastery complexes, temples, and shrines. Nearly 500 temples filled the caves of the hillsides outside of Dunhuang, and contain some of the finest Buddhist murals in the world. Meant as aids to meditation and worship, as well as representations of the quest for enlightenment, the images are striking for their still-vibrant colors and detail.

In addition to the artwork, an entire cave was filled with over 1000 bundles of scrolls and over 15,000 paper books in every language imaginable—some still unknown—that have proven invaluable to our understanding of the peoples and cultures who crisscrossed the Silk Road. To gain a glimpse into the world of the Road, the Mogao Caves are a must-see. 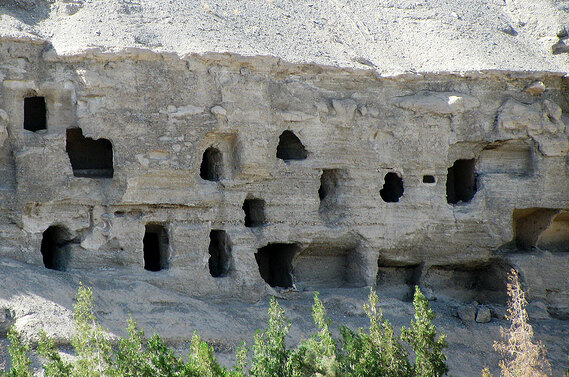 For a better understanding of the incredible diversity of peoples who traveled the Silk Road and who lived in this region of China during its heyday, nothing quite compares to the Astana and Tarim mummies, which have been found throughout Xianjian province near ancient routes and oasis towns.

The Astana cemetery, dating from the fourth to eighth centuries CE, contains over 500 tombs of Chinese settlers who had moved to the frontier to seek their fortunes in the prosperous western provinces. Naturally preserved by the dry climate, their bodies were wrapped in cloth and buried with personal objects that reflected the vast networks of trade—some were found with coins minted by the Byzantine empire nearly 5000 miles away.

The Tarim mummies, which are even older and may date as far back as 1800 BCE, hint at the travels of migratory Indo-Europeans toward the edges of China. Their bodies are remarkably intact—with blond and even red hair—as is their clothing and tattooed skin. One mummy, known as the “Loulan Beauty” for the degree of preservation that makes it appear as if she is merely sleeping, has helped to demonstrate that transcontinental connections between East and West began far earlier than most had imagined. They serve as a reminder that globalization is not such a recent phenomenon as we may think. 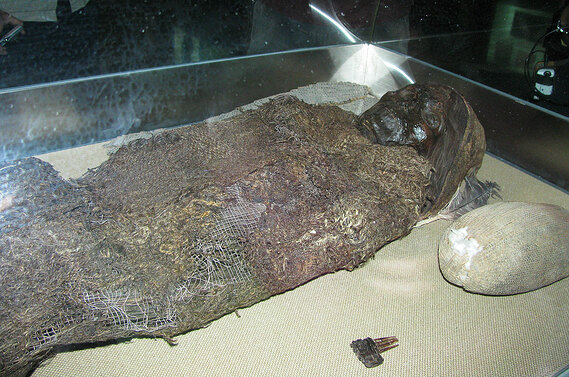 This September, immerse yourself in China’s imperial past, and follow in the footsteps of thousands of adventurers as we set out for the West, along China’s ancient Silk Road.