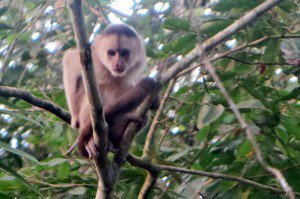 Ryan Gelderloos returned not long ago from what he called an “amazing” trip to the Galapagos Islands and the Amazon Rainforest. This wildlife adventure is captured here in his list of seven unforgettable encounters that left him with memories for a lifetime.

This was my favorite activity in the Galápagos Islands. Swimming side by side with pacific green sea turtles, marine iguanas, Galápagos penguins, sea lions, schools of yellow-tailed surgeonfish, octopuses, and a variety of sea stars was spectacular. Being able to enter the realm they’ve adapted to instead of seeing them on land gives one an entirely different understanding of the animals of the archipelago.

In the Galápagos Islands, reptiles rule the land. This is because their ancestors were perhaps best able to survive the 600 mile float from the mainland without food or water. They look like they are from another time period. The tortoises were larger than life, and the iguanas, yellow-orange in color, were calm but vicious monsters.

The two best birding sites on the trip were Genovesa Island and the canopy tower at the Napo Wildlife Center. Genovesa contained Nazca boobies sharing the path with us whilst red-footed boobies sat with their chicks in the trees. Great frigate birds would steal twigs from the boobies to make their nests. By the cliffs red-billed tropicbirds would glide with their thin tails sliding through the air behind them. On the lava fields thousands of storm petrels would flutter while their predators, the short-eared owls, would rest in the shadows. At the canopy tower we spent two and a half hours watching birds fly in and out and never got bored: orapendolas, scarlet macaws, channel-billed toucans, the many-banded aracari, the spangled and plum-throated cotinga, and the paradise tanager to name a few. The cobalt-winged parakeets at the clay lick gathered in the hundreds and then scattered away over our heads in a flurry of noise at the call of a crested caracara.

In the rainforest we had to canoe down a blackwater creek to get to our lodge on Añangu Lagoon. We were looking around for all sorts of creatures the forest could show us when we spotted in the water a few giant otters carelessly bobbing above the surface of the water. We listened to the raucous call of these creatures as they swam around. One of them was tearing away at a fish. Twice more during our stay we witnessed them swimming back and forth in the lake next to the lodge, searching for fish. The guide told us we were very lucky because the otter family that lives here has a territorial range of eleven miles. Otters were thought to have been hunted to extinction in Ecuador.

Ten species of monkeys thrive in the rainforest surrounding the Napo Wildlife Center, and although we were there less than a week, our guides Remi and Favian and some paddlers managed to sight eight of them. We were lucky to witness squirrel monkeys, red howler monkeys (which you can hear every morning), golden-mantled tamarin monkeys, white-fronted capuchin monkeys, dusky red titi monkeys, equatorial sakis, night monkeys, and a wooly monkey.

On our last full day at the Napo Wildlife Center we hiked the Tiputini Trail. It was a wet morning with lots of mud squishing under our rubber boots. Favian was teaching us about plants for which the indigenous community has found a use. Next to the trail was a muddied area littered with peccary tracks. Remi spotted fresh tracks that he explained were of a puma hunting the peccaries. He stopped and talked with Favian in Kichwa and then whispered to us, “Peccaries!” We went back up the trail, dropped our packs on a log, and trudged into the forest where we began to hear the snorting of pigs. We waited until the hundred peccaries crashed through the rainforest and splashed through the stream. We went back to the trail and caught up to them once more before continuing our hike.

During one canoeing excursion in the main creek of the Napo Wildlife Center, we paddled close to the edge to see one of the gigantic ant nests attached to the trunk of a tree. Remi said this one was special because the ants that live in it have developed a mutualistic symbiotic relationship with a group of wasps. He told us all to shout my name, “Ryan!” Soon we heard a synchronized pulsing sound coming from the nest. I told him that it sounded like marching and Remi explained to us that that was exactly what they were: marching wasps. Whenever there was a potential threat nearby, the wasps would warn the ants that provide them shelter by flapping their wings simultaneously, creating this strange sound.