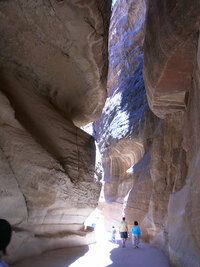 Is it safe to travel to Jordan?

Maybe you’ve seen the new Journeys trip to Jordan, or this video, or this blog post, and you’re enticed by what Jordan has to offer. But maybe you’re also wondering, with the instability in many Middle Eastern countries, is it safe to travel to Jordan?

We think it is, and here’s why:

Jordan’s culture is uniquely open and progressive compared to its neighbors.

Locals engage in a range of religious practice, and are comfortable with others whose lifestyles are different from their own. Women travelers do not need to cover their heads, and many Jordanian women do not either. Jordanians are famously friendly, respectful, and eager to share their experiences. Citizens are encouraged to speak openly about their opinions and ideas.

In particular, Jordanians are interested in meeting visitors from the USA. Because of the distance, there are fewer Americans than Europeans who visit, and Jordanians are appreciative of those who come. They also want to learn more about the experience of living in America, an important ally of Jordan and an icon of the openness and democratic values that set Jordan apart from nearby Muslim countries.

The parliamentary monarchy works well for Jordan, with a popular king who is nonetheless subject to checks and balances from a democratically elected government. A plurality of political parties offers Jordanians opportunities for expression and representation, and the stability of the monarchy counters the potential chaos of a multi-party environment. Corruption is prosecuted, and even when they disagree, citizens generally trust their government.

The Jordanian government is aware of its surroundings.

In the knowledge of the unrest throughout the region, strict security measures are visibly employed throughout the country. Tourists are kept away from borders with troubled countries.

Some countries are welcoming to visitors…. and then there’s Jordan. Encouraging visitors is both a social value and a national fiscal priority. The government goes to great lengths to understand the needs of travelers. Security monitoring is especially stringent in well-visited areas. Returning travelers report feeling safer than they could have imagined, and also more comfortable and more welcomed.

Sites of greatest interest to travelers are concentrated along the west side of Jordan. Meanwhile, the United States and other countries issuing advice to travelers suggest avoiding the border regions near Syria and Iraq, on the far eastern edge of the country. Meanwhile, Jordan maintains rigorous border security, including forces aimed at limiting onward movement of any insurgents that may manage to cross over the border.

Overall, it’s as safe as the USA.

Other countries rate Jordan and the United States similarly in the level of risk to travelers. Within both countries, they suggest evaluating risk geographically, and suggest that most parts of both countries are very safe as long as travelers use common sense.

Travel to Jordan with Journeys

Check out our Jordan itineraries, and let us know if you’d like us to send you more information about travel to this safe and diverse country.