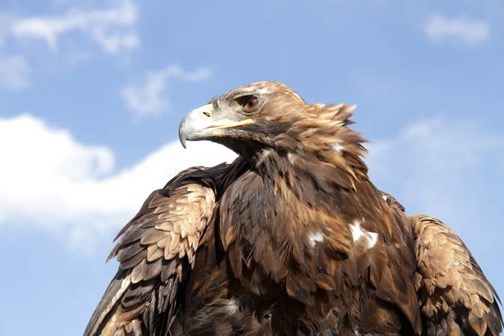 Things to Do in Mongolia: See the Golden Eagle Festival 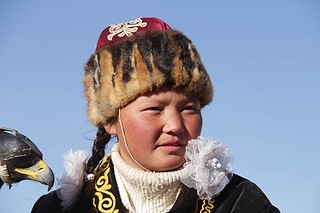 A recent documentary called The Eagle Huntress followed the story of Aisholpan Nurgaiva, a 13-year-old girl, as she trained to become the first female in twelve generations of her nomadic Mongolian Kazakh family to become an eagle hunter. Longtime Journeys traveler Dick Seibel attended the Golden Eagle Festival, where Aisholpan was the first female to ever compete in this centuries-old tradition. Here, he shares his story of witnessing this festival firsthand.

What is Eagle Hunting?

This type of eagle hunting has long been an occupation and/or pastime for Turkic people living in Kyrgyzstan, Kazakhstan, western Mongolia and other nearby areas. The hunter rides on horseback carrying the hooded eagle on his arm. When small game, preferably a fox, is found, the eagle is unhooded and released to chase and capture the game.

The eagle usually kills the animal with a blow through its skull with its sharp beak. Some hunt with eagles as a livelihood, selling the furs for income. There are many more “eagle hunters” who learn the skills and primarily consider this a sport and demonstration of their prowess. Eagles are mostly used for hunting for a couple decades and then released to return to the wild. Some eagles are raised in captivity and may be bred to be larger than the captured wild eagles.

Professional hunters call the practice berkutchy, or kusbeguy in Kazakh. Berkutchy is a life’s profession, and is often a hereditary one. The relationship of the bird and its master is constant and all-consuming. In the training of a young eagle, the master must sacrifice his sleep for a long period since training is a 24/7 task. For weeks, the growing bird is rendered sightless under its hood until its dependence on its master becomes complete. Such intimacy must turn into a lifelong trust with the eagle — twenty years or more. It is said that as the man trains the eagle, so does the eagle train his man.

There are an estimated 250 eagle hunters in the Western Mongolian province. Their falconry custom, so-called “horse-riding eagle falconry,” is unique; falconry in the Middle East, for example, uses several varieties of smaller falcons and hawks. The eagle hunters’ target is almost limited to Red Fox or Corsac Fox (white fur). They use eagles to hunt foxes and hare during the cold winter months when it is easier to see the gold colored foxes against the snow and the furs are more valuable. The tradition of hunting with eagles dates back a couple thousand years; it is mentioned by Marco Polo.

I attended an annual Golden Eagle Festival at Bayan-Ölgii Aimag in western Mongolia on the first weekend in October 2014. One of the participants in the festival was the teenage girl, Aisholpan, who is subject of this film. This was the first time a female has competed and she was also the youngest contestant, only 13 years old. 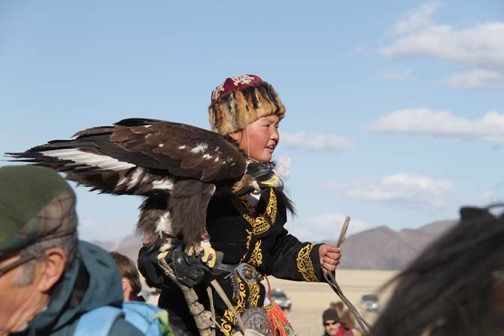 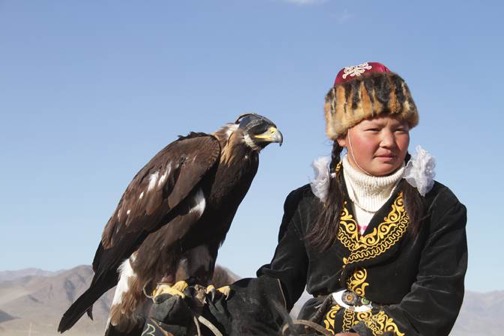 In the Eagle Festival, Kazakh eagle hunters (Burkitshi) celebrate their heritage and compete to show off the skills both of the birds and their trainers. Prizes are awarded for speed, agility and accuracy, the best traditional Kazakh dress, and more. About 70 eagle hunters gather for the annual Golden Eagle Festival. The festivities include a parade and dancing in traditional costumes, cultural exhibitions, demonstrations and handicrafts, and sporting activities and competitions four kilometers out towards the Altai mountains. Dressed in full eagle hunting regalia and mounted on groomed decorated horses, the entrants compete for the awards of Best Turned Out Eagle and Owner, Best Eagle at Hunting Prey, and Best Eagle at Locating Its Owner from a Distance.

Best Eagle at Locating Its Owner from a Distance

This latter competition was held on the first day of the two day festival. The contestant’s eagle is carried to the top of a tall hill beside the dusty field set aside for the competition. The owner rides into this arena and when ready signals the handler who releases the eagle. The owner rides slowly facing the mountain and calls the eagle and waves. The eagle dives toward the owner and lands on his arm; the man and eagle with the shortest time from release to landing securely is the winner of the competition. I recall a time of only fourteen seconds being announced but I don’t know if that was the winner. The contestant isn’t always successful; the eagle may simply soar around to enjoy the mountain scenery as if glad to be released. The rider may call and gesture for a while, then ride off in disgust. The trained eagle will eventually return to the owner, but they are certainly eliminated from the competition.

The teenage girl was competing for the first time, so another person, probably a family member rode around the arena with her. Her eagle performed properly and came directly to her. Their time wasn’t fast enough to be a winner in the competition. 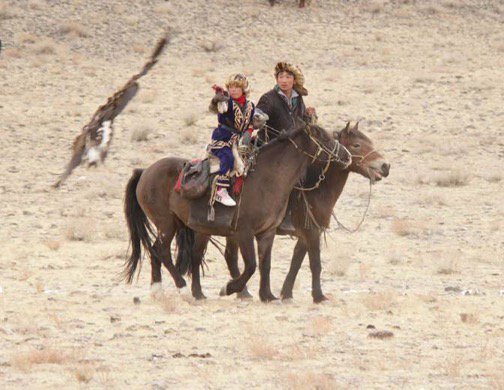 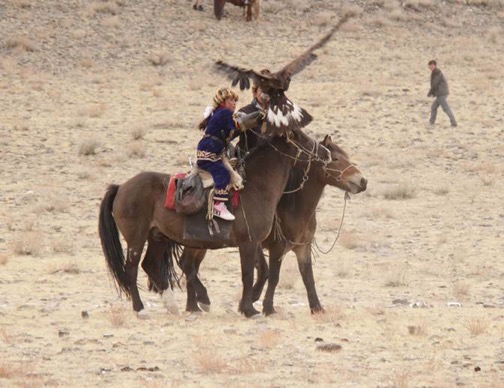 The second day of competition includes having the eagles chase a piece of fox fur “bait” dragged by a galloping horse. The eagles are released from the hilltop as in the first day’s competition. When the eagle lands on the bait, the hunter dismounts, gathers up his eagle and shows the judges that it is again within his control. Again, time is the measure of success. I have read that the top three hunting eagles determined in the second day’s competition compete by hunting live game such as a fox or wolf pup to find the overall champion, but I don’t think that was included in the competition I attended. The teenage girl didn’t compete in this event. 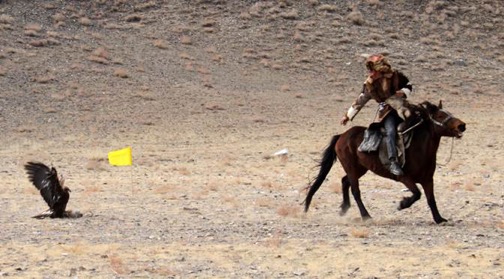 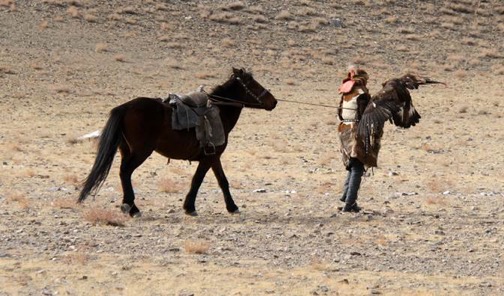 There was also a long distance camel race which wasn’t very exciting since all one saw was the starting lineup and the camels and riders were soon out of sight in the hills. They trailed into the finish line one by one quite a while later and I didn’t wait for them. However, the event was probably responsible for one of my favorite photos from the festival. 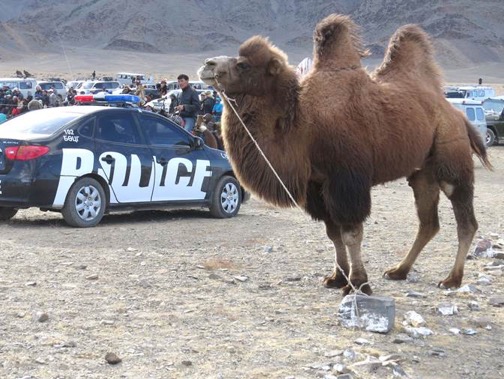 There were other contests of strength and agility during these days. I found the most interesting was archery. The archers fire arrows with padded tips at a row of two dozen leather balls a little larger than a baseball and not as large as a softball. The object is to knock the balls out of the row, and the measure of success in the competition is the number of shots it takes to knock away all of the balls. There is a spotter at the row who indicates to the archer which ball to aim for. I could not determine whether the spotter was an official designating a requirement for scoring, or a helper for the archer to give him a better aiming place. 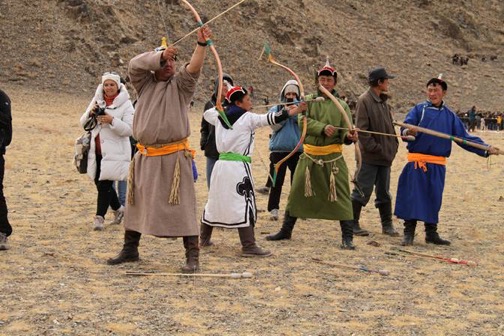 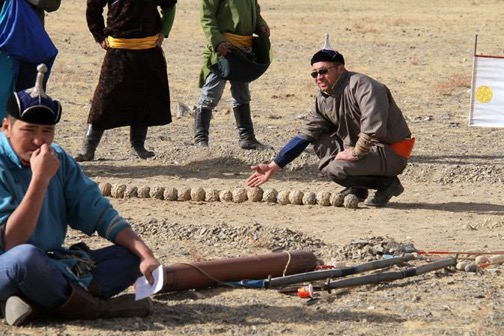 Other sporting activities included the highly entertaining Bushkashi; a goatskin tug of war on horseback. Buzkashi is literally “goat bashing” in Turkic. It is the Central Asian sport in which horse-mounted players attempt to drag a goat carcass toward a goal. Traditionally, games could last for several days, but in its more regulated tournament version also has a limited match time. I have seen bushkashi played as a team sport in Kazakhstan and it is quite energetic and violent. Riders wear heavy clothing and maybe a helmet for protection from the whips and boots of their opponents. A team of mounted men, usually ten, try to carry a goatskin (or a beheaded goat carcass) across the opposing team’s goal line. The opponents are constantly trying to wrest the goatskin away and/or block the rider’s access to the goal.

At the Golden Eagle Festival there was a one-on-one competition where two men on horseback tried to wrestle a goatskin from the other contestant. An official brings a skin into the arena and permits both contestants to get a grip, whereupon they ride off and struggle to gain exclusive possession before riding off in triumph. This is an elimination event where contestants compete against other winners until only one is left as the winner. 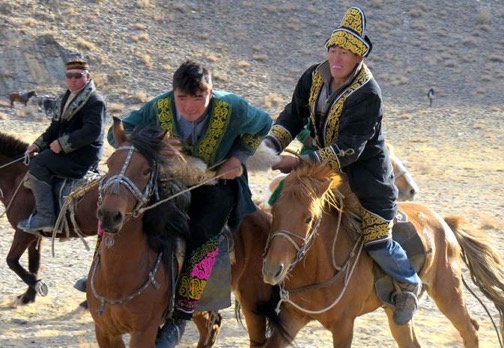 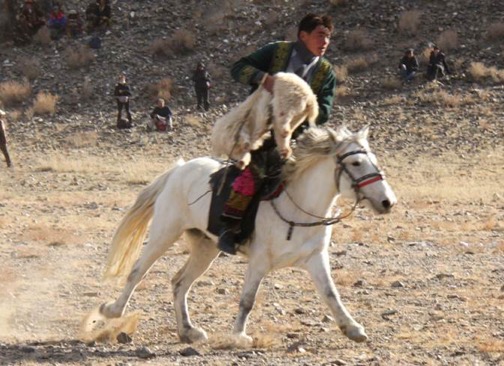 How to Hold an Eagle

The eagles are quite heavy, males averaging about eight pounds and females about eleven pounds. The Eurasian golden eagles are larger and heavier than those we see in North America. There is a strong preference for the heavy birds for hunting and competition, and the eagle I encountered closest was estimated at about fourteen pounds. Notice that the girl has a T-shaped rest on her saddle so the weight of the bird isn’t always on her arm. Also, I found that a two hand support is almost essential. When on an arm the eagle is on a heavy leather glove. You pick up the eagle by slipping your hand into the glove and then the hunter withdraws his hand to give you the full weight of the hooded eagle. 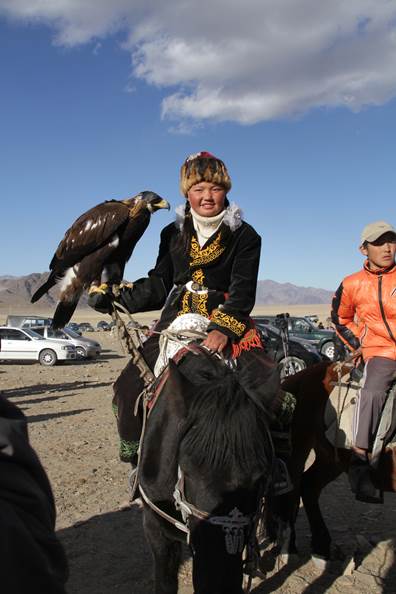 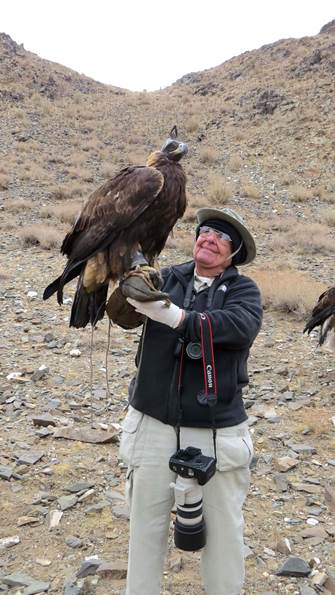 People don’t know a lot about Mongolia, which is the very reason they should venture there. Outside of its largest city, Ulaan Baatar, Mongolia provides untouched and abundant natural scenery, making it a very special destination that takes travelers off the tourist path. There is a wide variety of things to do in Mongolia, and if you ‘re interested in learning about them, let us know.

tell me more about travel to mongolia